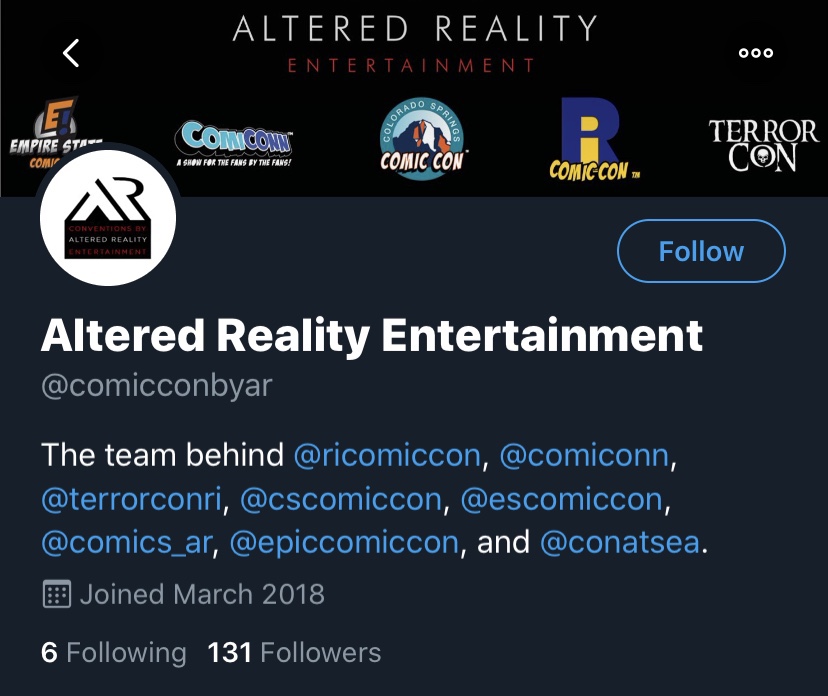 REALLY BOLD HEADLINE, I know, lol. If you haven’t heard of Altered Reality Entertainment, you probably have and just didn’t know it. They organize/run (strong wording to say any of these cons are organized or run, but we’ll get back to that) a LOT of northeast conventions – Empire State Comic Con, Epic Comic Con, South Coast Toy and Comic, TerrorCon RI, ComicConn, whatever Con at Sea was before they purged all info from the internet and most notably, Rhode Island Comic Con. Probably more. It’s not always apparent a con is run by them because they use many different accounts…

I really started looking into them when Empire Comic Con came to town here in Albany, NY. I love supporting local cons (you guys know this!!) and was interested in a new con in the area. Maybe it would be big. Then I saw it was by the same people who run RICC… a con known for last minute cancellations.

Okay. Cool. Then the cancellations started. With Jason David Frank in 2018, who promised to be here in 2019. That was never followed up or talked about again.

I can no longer find the Facebook post, but as Rhode Island Comic Con approached, the night before someone finally admitted to a ton of cancellations in a comment on a post questioning it. That really did it for me. I didn’t check out ESCC 2018.

I heard from friends it was okay! So I did end up going in 2019. It was.. a funko pop exhibition. I had a good time with friends though. I go to so many cons and I guest at a few, so some of the guests overlapped and I was able to talk to them at a different con about what happened with RICC. According to them (I won’t name them lol sorry) the con had canceled on them, never announced it, and made the guests look terrible to their fans. Interesting. It does happen repetitively, and with so many cancellations you really gotta wonder… 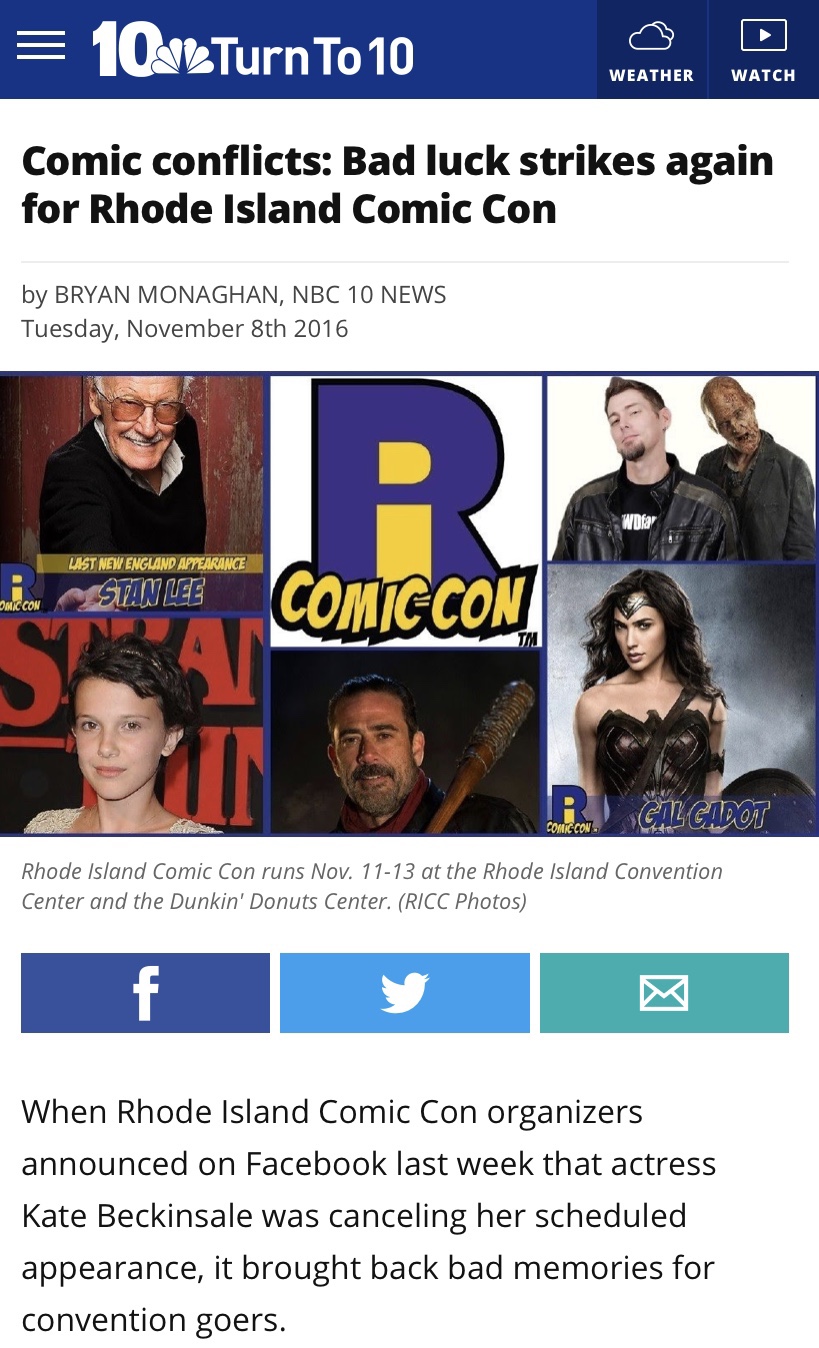 Then I heard about the Atlantic City Con that they just… canceled? Apparently without elaborating as to why, and not refunding… 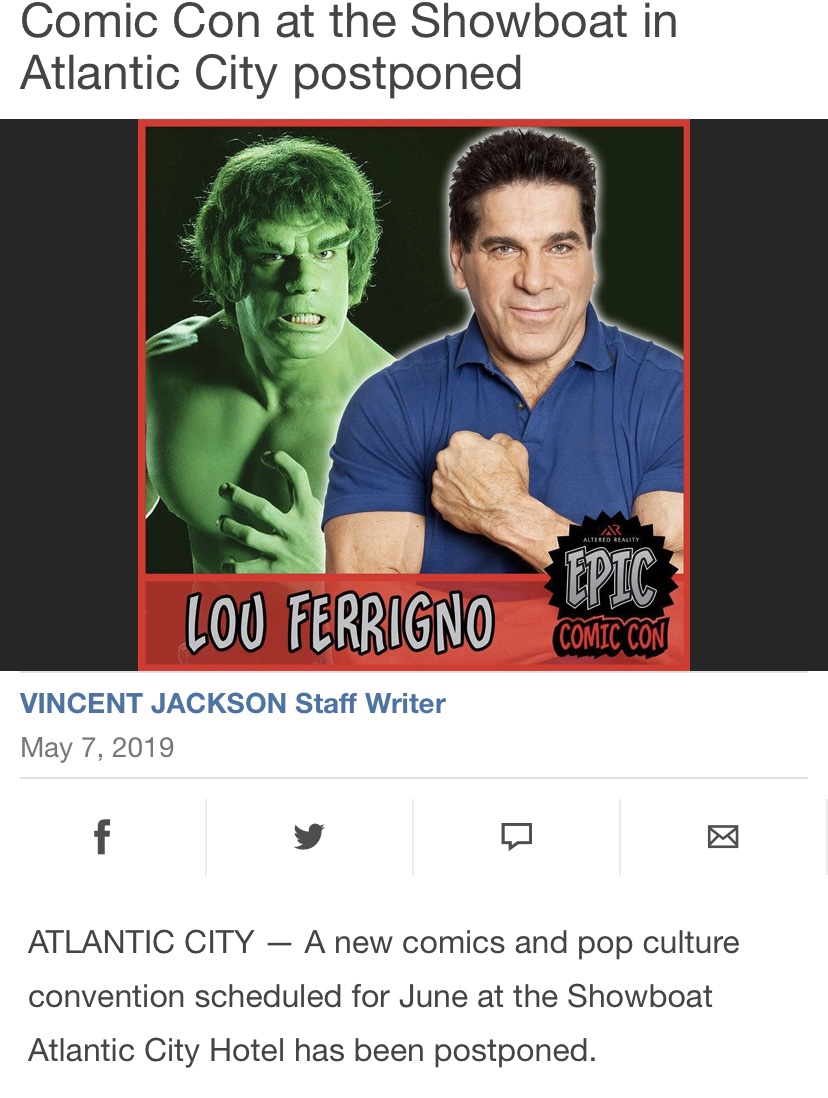 They said it was postponed? But never happened, never announced new dates…

[EDIT 2/4/20] Removed a screenshot of a public tweet here about a refunding issue here because the twitter user was receiving hate mail.

As of today, it hasn’t been officially announced that Empire State Comic Con 2020 is canceled or postponed, but a few friends found out in a comments section:

What tf. If you know… make a post!! People, guests and attendees are planning and budgeting for your extremely high ticket prices and weird fees. LET THEM KNOW.

It seems they’re not very good at refunds.. I checked the better business bureau.

A $190 VIP package? Oh my goodnessssssss.

Anyway, I was just chatting with a convention friend about it and I found out about their new con that popped up out of nowhere!! Interesting, with all these cancellations and postponements…

So I looked it up so y’all know what to avoid:

Idk what to say. It’s all so sketchy. Plan your convention year carefully, my sweet angels.

And if you have a convention horror story please email me j3nnard@gmail.com ❤️

EDIT 2/3/2020: Someone has posted this in the Facebook group “Rate That Comic Con”. Here’s a comment I found really interesting…

EDIT 2/5/2020: Removed screenshot of comment from last edit to protect identities better. The group is public, you can check for yourself.

Myself and other commenters are receiving harassment/hate mail.

In response to this article, the press director of Altered Reality Entertainment chose to doxx me. Posted my personal information to the group mentioned above with over 7000 group members. The con could have reached out, ignored it, just taken it as one bad review. Instead, she chose to doxx me. Beyond unprofessional, it’s shocking. A group admin has removed my personal info, but she is still in the group.

It appears their friends are now piling on the post.

Time to literally just say yikes and move on.