Hey! So ever since Plattsburgh Comic Con people have been wondering who the Captain America/Bucky Barnes in all of my selfies is, and guess what!! It’s Lady Bridget Cosplay!! We met her there and we all had an absolute blast with the whole weekend, and what’s even more exciting is that Bridget is coming to Saratoga Comic Con as a cosplay guest. She was kind enough to answer our featured cosplayers questions so that you guys can get to know her a lil bit before she comes to visit. Enjoy! And make sure you check her out on Facebook & Instagram: ladybridgetcosplay

1) How long have you been cosplaying?

I started doing cosplay a year ago this month, actually. I had gone to comic cons previously, was in and out of theatre growing up, and always counted down the days to Halloween – but hadn’t jumped into the cosplay world until last year.

First of all – I love it. I have always enjoyed taking on a character from mini shows I forced my parents and friends to watch as a child, to larger theatre productions, to Halloween. I have also always been very crafty – I made my first outfit when I was 7 or 8 (a skirt with flying pigs on motorcycles). Cosplaying lets me bring that crafty artsy part of me to the front and I can go wild with it – same with getting into character.

3) Is cosplay something you plan on doing for the rest of your life, or is it just a fun hobby for now?

Cosplay is a part of me now – I can’t imagine going through life without it. The last comic con that I attended, there was this elderly couple that were walking around enjoying themselves immensely. The woman was dressed as a Princess, and her husband as her Knight in shinning armor. My new life goal is to be like them, still going strong and in cosplay, when I am in my eighties.

4) What was your first convention?

My first convention was Wizard World Tulsa (in Oklahoma).

5) Do you ever have to deal with negative feedback towards your cosplays, and if so, how do you deal with it?

Unfortunately, yes I have had to deal with negative comments. I try my best to take the comments with a polite smile on my face, disengage when I am able to, and remember that at the end of the day what really matters is if I had a good time.

6) When people tell you they love your cosplays, how do you respond?

With absolute joy! I put countless hours into researching and making my cosplays. I am always working on improving and sometimes I can be my own worst critic. When someone comes up and tells me that they want to take a picture with me, that I inspired them, or that they love what I am doing it makes me so happy.

7) What’s the most recent convention you’ve attended? Rate the experience?

Last weekend I went to Plattsburgh Comic Con. It was my first convention in the North East. I had a blast – it was a good introduction to conventions up here.

When I have to take it all off at the end of the weekend and return to the “real world.”

The cosplay community – and seeing people discover their love for cosplay.

10) Do you tend to stay in character in your cosplays?

11) Do you cosplay outside of conventions?

Yes! I was a part of a Cosplay for Charity group when I was in Oklahoma, and we would go to different walks, fundraisers, conventions, and even hospitals. We did it entirely in cosplay!

To date, so not counting the one that I am about to venture into making, it would have to be my Black Widow cosplay. I had a pattern – and then I basically had to scrap the pattern and draft it from scratch. It took a lot of adjustments, fixing of machines, fittings, tears, Netflix binges, and ice cream. But! It got finished and I love how it came out!

My Winter Soldier was probably the easiest. The only part that I had to make – other than dying the gloves – was the arm. I used duct tape.

14) Have you ever entered any contests/do you hope to?

I have entered into contests before, and I plan on continuing to do so. Regardless of if you place or not, I enjoy getting to walk across the stage and show all of my hard work off. I also LOVE to see what all the other convention goers are wearing!!!

Saratoga Comic Con!! I will be a cosplay guest there so come say hi! 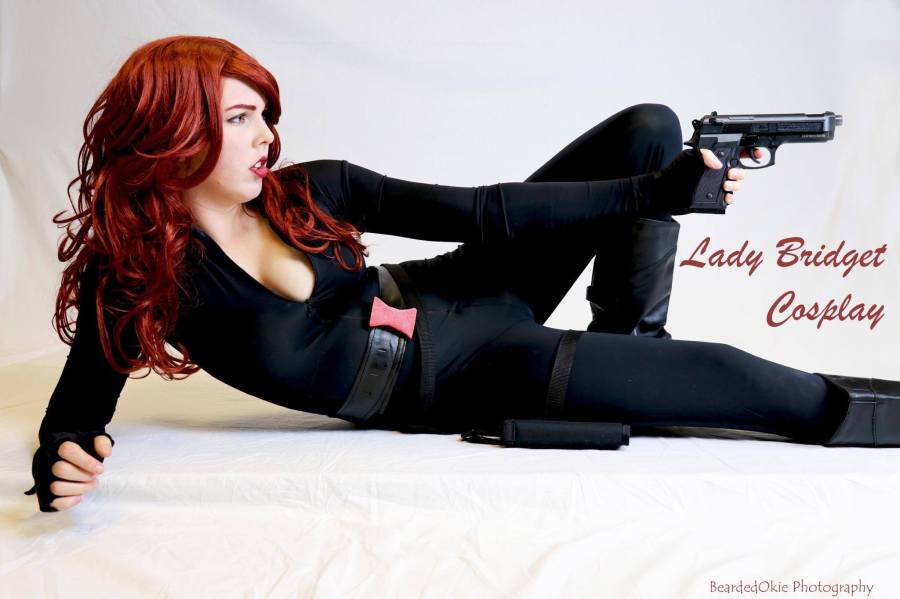