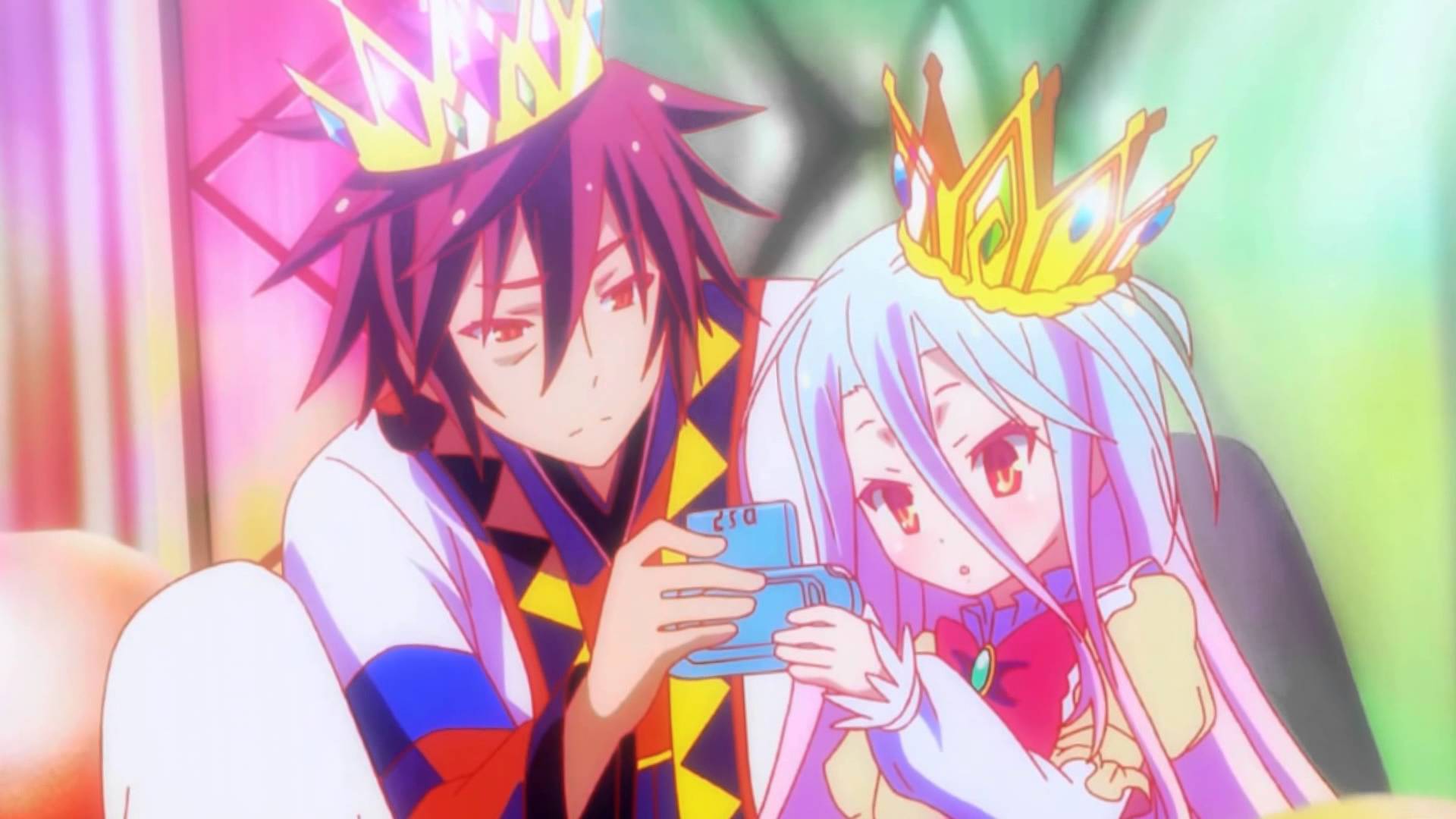 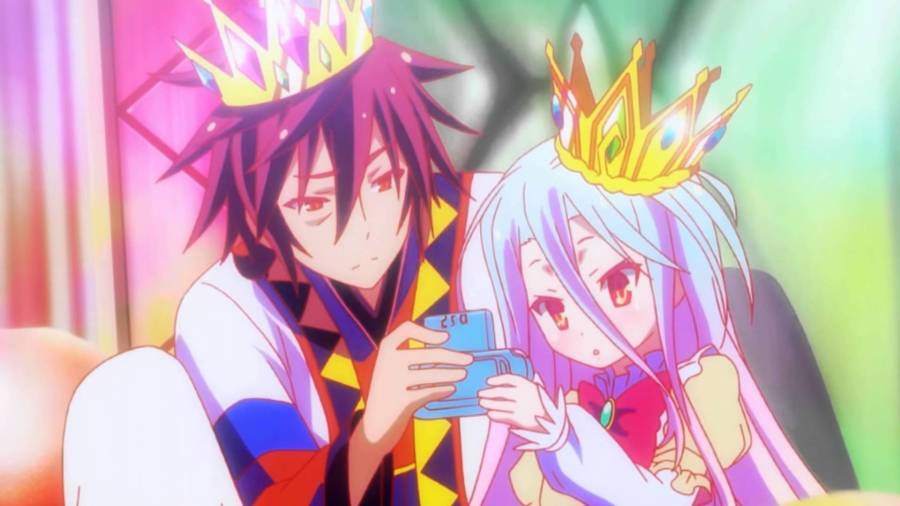 Ok so with the manga, I thought the story was good but the incestual tones and pedophilia (which is super common in anime) was a lil too weird for me. Which sucked, because the concept of a world where every decision was made by gaming is an awesome concept and I felt empty giving up on the story so soon. So I decided to give the anime a go since I heard it’s a little less.. gross. It is.

No Game No Life follows two expert gamers: a brother (Sora) and sister (Shiro) who refer to themselves together as Blank. They are never defeated, and just too dang good for this world. The god of another world – Disboard (gosh, that’s a dumb name omg) decides to have some fun and scoops them up off this Earth for his own world. In Disboard, every decision, dispute war, even who the king is settled by gaming. Woo.

That’s the summary, here are the SPOILERS.

In no time, Blank becomes king. Predictable, but still really cool to watch it happen. Shiro isn’t really a likeable character for me, I get that she’s a small child but she kind of has that small weird mysterious yet cute child trope that sooooo many manga/anime use… plus her obsession with her brother kind of insults her character to me. She’s strong, smart but very young, and her obsession with her brother and the repetitive unnecessary panty shots kind of sexualize her and – yuck. But that’s a whole separate issue. Some say the two characters compliment eachother – they do make eachother strong, and together they work out problems like Disboard has never seen. But that’s something siblings can do without making it weird, and this anime took it a bit too far.

Okaaaay, i’ll stop bitching about the incestual tones now and actually talk about the show. 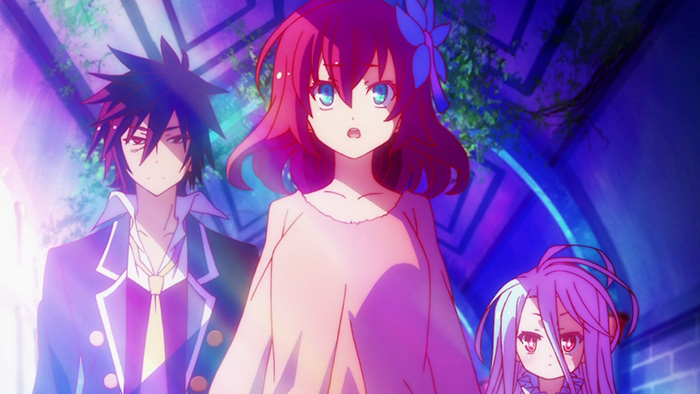 Blank is unstoppable, yeah, but this is a new world to them – so is there someone stronger here? That’s what keeps it interesting. Stephanie Dola, a character I mentioned when I talked about the manga is probably my fav character in the anime – she truly cares about the fate of her people and pushes Blank to succeed because she believes it will help them. Good luck to her. They’re like, lazy.

Whenever a new problem or game is presented, rules are explained but sometimes they don’t make sense. That’s something I’m kinda used to in anime – sometimes stuff doesn’t make sense and you move on and pretend it did. Or maybe i’m just not on their level and i don’t understand their advanced gamer minds. Who knooooows.

One thing I looooooove is the animation – I’m a slut for animation and the colours in this one just slay me. The pinks and purples and blues are so bright and they mix so well and I love the aesthetic of this world. And Shiro’s hair. The colours used/character designs are really cool.

In conclusion – good show, interesting, funny at points, incest is bad. Still one of the better anime on Crunchyroll. Watch it for free. 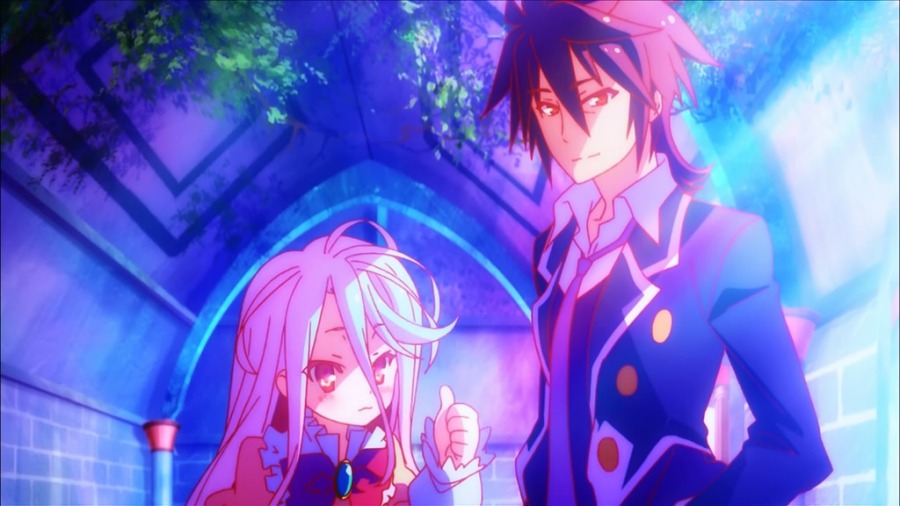