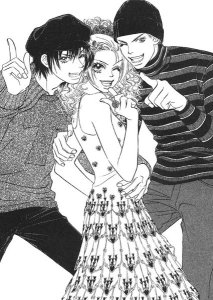 I finally finished the Peach Girl series that I’ve been in love with since like, the fifth grade. (it took me a long time to figure out that there were more volumes, okay) I loved every second of this manga, even the parts where I hated Sae. But my problem with a long series like this is that when it’s over, I want more and no matter the outcome I definitely feel empty for a few days without it. With Deathnote, I was really mad because I thought the ending was stupid but with this the ending was perfect and I’m kind of sad about that, too. Because I want more books. And I want to see more of Miwa Ueda’s flawless manga art.

Anyway!! For those of you that have read Peach Girl (or don’t care about spoilers on a 15 year old series):

In volumes 1-5, I didn’t like Momo’s character as much as I used to, Sae seemed different and almost regretful of her past as a huge bitch, and I still loved Kiley/Kairi. Madly. (Oh, and Toji is lame as hell. I hated Toji always. Boring dude.) Weeeellll in 5-10, things kind of went back to the way they were in the original 1-8 Peach Girl series, with Sae being awful (well, not as bad, but still a meddling ho) And Momo and Toji got back together. I hated that, it seemed so not like Momo? Like I *guess* Kiley broke a promise but that doesn’t mean Momo would just be that easy for Toji to take advantage of. Momo’s stronger than that. What happened. I know Momo was weak because of emotions with the Kylie break up & she used to love Toji but REEEEALLY. REALLY. Got me heated.

Anyway I love Kylie, and Kylie loves Momo. Basically some dumb stuff happened and then it all worked out in the end.

I have to say, I am an excellent judge of character, because I have always thought Toji was awful and then in the last book Toji got aggressive with Momo and I was like “Saw. That. Coming.” Basically she SHOULD HAVE STAYED WITH KILEY.

Well Kiley and Momo got back together in the end, and it was the perfect ending. I’m craving more Peach Girl so I have to read Sae’s Story, which I know is just gunna’ piss me off because Sae is terrible (but I’m starting to kinda like her…..). Oh well. I know what books to look for at the manga stands at Connecticon now.