So I had the pleasure of CHECKING OUT THE NEW STAR WARS TOYS a couple hours ago. Everyone is pretty hype about the new merch and I must admit my killer Star Wars collection could expand… well anyway the new stuff came out today and there was cool new items but mostly it was really underwhelming for the amount of hype/advertising there was.

There is Tons Of New Stuff. New figures, new characters, hot wheels cars, LEGOS, Micro Machines (!!!), new Black Series… just tons of stuff. The new Black Series figures are in crazy new boxes with a red background, and the Chewbacca is the shining star of this set in my opinion. I think I would be more into the new characters if I knew who they were. Really the most exciting part was the LEGOS, with a *new* Millennium Falcon set featuring tons of characters including OLD HAN SOLO. I can’t believe there’s no other merchandise featuring old Han Solo. Honestly he’s the best part of the trailer?? He’s what’s got everyone PUMPED. I’m going to start collecting exclusively elderly Star Wars characters.

WHAT WILL I BE PURCHASING??? Well probably the new LEGO Millennium Falcon. DEFINITELY FURBACCA, WHO ISN’T OUT YET. I AM SO DISAPPOINTED I WANT HIM SO BAD AND I HAVE WAITED SO LONG. LOOK AT THIS THING. 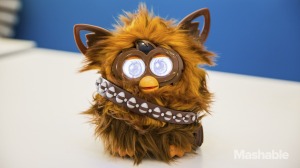 I just love him.

Also I find the resurrected Micro Machines to be pretty rad and I’ll probably throw some cash at those. Sounds good.

Okay!!! I hope you guys find some cool Star Wars stuff you like!!!