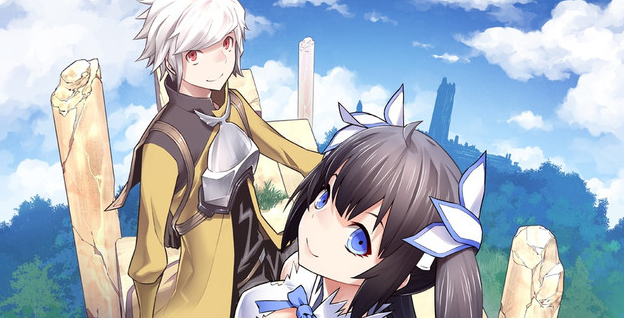 Okay!! This is a super good one!! Let’s get started. Is It Wrong to Try To Pick Up Girls in a Dungeon? is a new anime that started airing this past April! It’s based off of a novel and there was a manga adaption too. Tbh I read the first book of the manga before watching any episodes and I loved it! ~

It does reaaaaallly pander to fans though, with the main character being an average man who’s only skill being his will to succeed, and all the girls being really sexy and obsessed with him. I mean, that’s most anime, this one just kind of rubs it in your face and it kind of feels silly like they’re trying to do it on purpose.

The main character is 14 yr old Bell Cranel, and he’s an adventurer that works for/supports Goddess Hestia. It’s made clear really early in the beginning that he falls for a powerful swordswoman in the dungeons he fights in. Her name is Aiz Wallenstein and she is the stereotypical tough, beautiful and mysterious girl. Bell seems to be quite the hottie with all the ladies in town showing interest in him.

The dungeons he fights in contain dangerous monsters, and he slices them up good for cash to support his familia, which is just Goddess Hestia. There are levels to the dungeons though, and it gets hard in there. Bell is strong and adapts quickly to ANY challenge he faces.

Fav Character so far? HESTIA. She’s feisty and fun and a total cutie, a tough goddess with a part time job. My second fav is Eina, an elf girl that works in the guilds where Bell gets cash for monster killin’. Characters seem to be from various species, but there’s not any explanation for that. In fact, there’s not really any explanation for why there is this large ass dungeon full of monsters, either. It’s good, though.

I like the manga adaption better than I like the anime, but I like watching the anime after reading it because it helps me figure out how all of the inconvenient looking female outfits are colored/how they work. Random ribbons under large boobs? Ok. Doesn’t that get annoying? Oh well. Regardless of their fashion choices, literally all of the characters are loveable. I get attached fast.

Have I convinced you to read it? Even if I haven’t, you should anyway. I know I probably made it sound hella complicated but it’s easy to follow and it’s very fun and silly and it has cute girls. And a bit of action scenes! Yay. Definitely check it out if you’re into that anime/videogame aesthetic. The anime is available on Crunchyroll and I got the books on Amazon. You’ll have a good time.